Comparing the best of fireplace mantels: Finding the perfect one for your home

The interior of a house is a perfect reflection of the values and preferences of the owner. And because it speaks volumes about important aspects as such, making careful decisions concerning the décor of your home becomes immensely important. There are a lot of different things that make up the interior of a house. Some general items, others a bit lavish yet equally important. Even though the decisions regarding the conventional items don’t pose much of a challenge, the same cannot be said about the other category of items.

The investments to be made into these items are considerably high and so is the degree of their contribution to the overall appeal of the setting. One such crucial addition to a house is a fireplace mantel. The inclusion of a hearth is a basic necessity for many households and a fancy accessory for others. Irrespective of the reasons behind the installation, the fact that this is a pricey possession remains unchanged. And certainly, making prudent decisions takes priority when a hefty amount is to be spent on an accessory.

The most vital choice that you have to make while deciding on a mantelpiece, is the selection of the material. Some people seem to be inclined towards an ancient fireplace, while others prefer a variant that matches the modernistic architecture of their house. But inclinations based solely on the design is likely to lead you to a sore investment. Therefore, you need to consider a variety of other relevant aspects while buying the product. The chief one among these factors is, as mentioned earlier, the material used to manufacture the surround.

When it comes to popularity, a marble mantle is second to none. This is rather obvious given the fact that the durability and longevity, that is offered by this material is downright unrivaled. Also, marble happens to be one of the most conveniently customizable stones that can be used for designing. Hence a decent number of variants may be crafted by the manufacturers and, consequently, the docket of options available for a customer is further expanded significantly. The White marble fireplace mantels are the most sought-after option of the category.

Limestone fireplace surrounds happen to enjoy a fairly decent degree of appeal, which is all thanks to its tendency of complimenting classy architectural feats, which are relatively common these days. The range of options from this material is quite phenomenal! Regardless of your taste for either the classic and traditional, or the more modern and trendier, these artistic masterpieces have something for everyone.

The cast stone mantels are the perfectly blended hybrid of marble and limestone. It is a material that is durable as well as versatile. Thus, it never fails to prove itself to be the reliable canvas for etching and carving an artisan’s craft! To get your hands on the best quality products, Stone Fireplace is the place for you to be. Crafted by exceptional artisans, using only authentic and reliable stone, this company leaves no stone unturned to prove itself the very best provider of fireplaces in the market!

Fireplace Mantels: Serving as both an aesthetic enhancer and home warmer

Choosing a product for your house is rather a tough task. The difficulty of the task has to do with the brainstorming that one has to do before fixating on the one product that ticks out on all of the requirements on your checklist. This particular dilemma is increased by several manifolds when the product in question serves as a multi-purpose item. And fireplace mantels surely fall under this category.

These pricey warmth providers double up as home décor additions as well. Yes, that is precisely correct! Contrary to popular belief, the primary purpose of buying a black marble fireplace is to make your home look elegant. Even though it is indeed one of the aims accomplished by the article, another initial motivation behind investing in this commodity was its temperature regulating properties.

Predominantly used in countries with cold climates, the demand for this item increased when more and more importance was given to its build quality and demeanor. For instance, instead of using a simple wooden frame to achieve the intended, people are willing to spend a fortune and own an old world stone fireplace. Because the functionality achieved by both the variants were identical, the reason for going with the latter option is pretty much obvious.

The statistics regarding the demand of these fireplace mantlepieces is, simply stated, overwhelming. A survey conducted on about 100 real estate agents back in 2013 wielded results that justify the above stated. When inquired about the desirability of fireplaces, it was found that a staggering 80% of clients are inclined towards having one in their home. The yearning was so much so that they were willing to pay an additional 5,000 dollars for this addition.

But the lack of allure wasn’t the only thing that brought about this change in preference. There were quite a handful of drawbacks that the previous generation of mantelpieces had, which needed immediate attention and fixing. Wooden surrounds were infamous for causing inadvertent housefires that ended up causing causalities. On the other hand, a cast stone fireplace surround posed no such threat.

Limestone fireplaces manage to provide unprecedented longevity. The fear of termites eating away your treasured possession wasn’t a bother anymore. As for the heat emancipation, the bright glow that engulfs the room when the fire from the hearth falls on the limestone surround brings about a feeling of blissful to soothe and warmth. Is there possibly anything more that one can ask for in a cold, winter night with family?!

If you are convinced with the advantages offered by a fireplace mantle and intend to buy one for your home, the next bother some question that requires dealing with is, where to buy it from? ’Stone Fireplaces’ is the best provider that provides you with plenty of enticing options to choose from. Even though marble fireplaces are their specialty, they are adept with the handling of other crafting materials as well.

With a satisfied customer base testifying for their proficiency, there remains only so much to be unsure about! 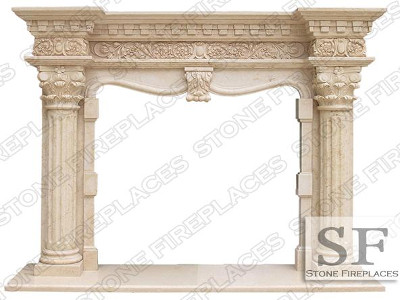 Marble mantels are a popular choice for homeowners who want their fireplace to be the focal point of the room. Imagine the family sitting around a roaring fire, sharing stories, and enjoying each other’s company while the marble mantle holds family photos. Those photos are memories of the good times. They portray events that were special and showcase the kids when they were younger. This is a very important part of a home, don’t let an important space like this be ruined with the look of a cheap mantel made of unnatural materials. A spot like this deserves the best natural stone money can buy.

If you are interested in sprucing up your space with a marble mantle you might consider hiring professional help.

These mantles need to be measured because some of them are custom made. You might be able to find one in stock that meets your needs but the fireplace should still be measured properly. Measure more than once to be sure to get the right fit. Once the space is measured and the mantle ordered, it will have to be installed. This will most definitely need to be done by professional contractors. The fireplace is the focal point of the room, if there are flaws, they will be noticed.

Choosing to order a marble mantel is an excellent decision. This purchase will add value to the home and to family time. There are many to choose from and each one will be unique because marble is a natural stone; no two pieces are going to be identical. The piece you order could be smooth and simple with clean lines or it can be carved and ornate with intricate patterns. It is really up to the homeowner and their particular style.

Once marble mantles are chosen they can be ordered. Buyers will need to call or email to place their purchase. These are custom made so every detail is important. Be sure to have your measurements and payment option ready when ordering. If you have any questions, get them answered before placing the order and making the purchase. Once the order is made, expert masons will begin working on your custom marble fireplace mantle. In a matter of weeks, your space will be the focal point that you always dreamed it would be.